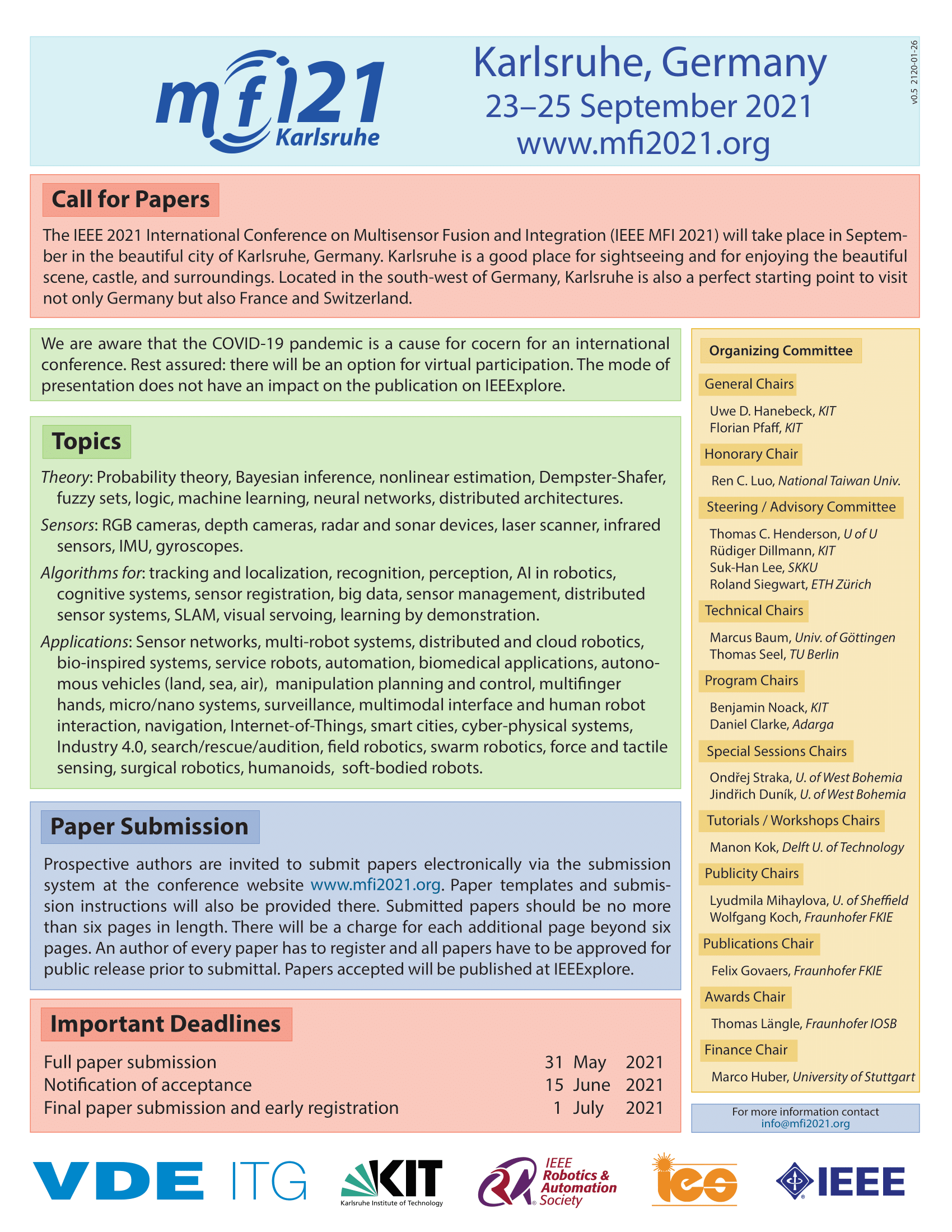 The 2021 IEEE International Conference on Multisensor Fusion and Integration (MFI 2021) will take place in September in the beautiful city of Karlsruhe, Germany. Karlsruhe is a good place for sightseeing and for enjoying the beautiful scene, castle, and surroundings. Located in the south-west of Germany, Karlsruhe is also a perfect starting point to visit not only Germany but also France and Switzerland.
We are aware that the COVID-19 pandemic is a cause for cocern for an international conference. Rest assured: there will be an option for virtual participation. The mode of presentation does not have an impact on the publication on IEEExplore.

Prospective authors are invited to submit papers electronically via the submission system at the conference website www.mfi2021.org. Paper templates and submission instructions will also be provided there. Submitted papers should be no more than six pages in length. There will be a charge for each additional page beyond six pages. An author of every paper has to register and all papers have to be approved for public release prior to submittal. Papers accepted will be published at IEEExplore.

The Organizing Committee of the 2021 IEEE International Conference on Multisensor Fusion and Integration (MFI 2021) is welcoming proposals for Special Sessions on the theory and application of multi-sensor fusion and integration. Of particular interest are proposals that address “breaking news” research or topics that may be difficult to categorize for the regular sessions.

Theme and Topics of Interest

Special session proposals will be evaluated based on the timeliness of the topic, relevance to the field of information fusion, number of potential papers (assessed from the list of invited papers), as well as the qualifications of the organizers. Once the proposal has been approved, it will be included among the sessions available for authors to submit their papers to.
All papers submitted to a special session will be reviewed through the same review process as the regular papers of the conference to ensure that contributions are of high quality. If a special session has more papers accepted than the schedule can accommodate, some of the papers might be moved to other relevant sessions.

The proposals should be submitted via e-mail to special-sessions@mfi2021.org or via the conference submission system with contribution type “Special Session Proposal”.
For additional information regarding the special sessions, please contact the special session chairs Ondřej Straka (straka30@kky.zcu.cz), and Jindřich Duník (dunikj@kky.zcu.cz).

Call for Tutorials and Workshops

The Organizing Committee of the 2021 IEEE International Conference on Multisensor Fusion and Integration (MFI 2021) is welcoming proposals for Tutorials and Workshops on the theory and application of multi-sensor fusion and integration. Each proposal should be about either a workshop or a tutorial. However, proposers are welcome to propose a tutorial and a workshop about the same topic.

Theme and Topics of Interest

Proposals for tutorials and workshops may cover the conference’s topics of interest as found in the MFI 2021 Call for Papers. Other areas where multisensor fusion and integration are applicable are especially encouraged. Examples include but are not limited to fusion of soft and hard data, deep learning, fusion for cybersecurity, autonomous systems, and robotics.

Proposals for tutorials and workshops may cover the conference’s topics of interest as found in the MFI 2021 call for papers (see above). Other areas in which multisensor fusion and integration can or should be applicable are especially encouraged. Examples include but are not limited to fusion of soft and hard data, deep learning, fusion for cybersecurity, or geospatial sensing and analysis.

Tutorials should cover a single topic in detail and should present the state of the art about a frontier topic, enabling attendees to fully appreciate the current issues, main schools of thought and possible application areas. Honoraria are paid to all tutorial speakers. The honorarium is made up of a basic amount plus a variable bonus. The bonus is directly taken from the tutorial fees and thus proportional to the number of attendees. If a tutorial is given by multiple speakers, the honorarium for their tutorial is shared among all speakers.

Workshops complement the main MFI 2021 conference by giving groups of people the opportunity to hold a small “microconference” as part of the MFI 2021 conference. Workshops can vary in length but they always share key points of the technical program (such as plenary talks) and social events (such as the banquet) with the main conference. Exact workshop paper submission and author notification due dates are at the discretion of workshop organizers but must fit in the main conference time-line.

Tutorial and workshop proposals should not exceed 2 pages and should contain the following information:

Proposals should be submitted in plain text or PDF, by email to the tutorial and workshop co-chairs, Manon Kok (m.kok-1@tudelft.nl) with the subject: ‘MFI 2021 Tutorial Proposal’ or ‘MFI 2021 Workshop Proposal’.

Symposium Sensor Data Fusion has been merged into MFI 2021

The 15th Symposium Sensor Data Fusion »Trends, Solutions, and Applications« has been merged into the MFI 2021. A series of special sessions will be allocated to SDF within the MFI 2021.